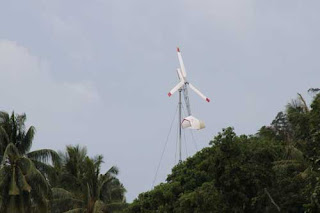 FAILED TECHNOLOGY: One of the wind assisted turbines to generate electricity that failed to function

Four wind turbines costing about RM4 million commissioned last year to generate electricity for the villagers of Telok Melano are not functioning anymore.

“We now have to rely on the generator set to produce electricity for our daily needs and to be in touch with the rest of the world,” he said.

The village head is urging the relevant authority to look into the matter urgently.

“For now, the villagers and I can only say it is a failed technology,” he lamented.

The villagers also urged the authority to look into the possibility of building a new jetty to replace the present one that had collapsed and became unusable by boat operators, who need it to berth their boats for loading and unloading goods and their passengers, who are mainly villagers.

It was graced by Assistant Minister of Public Health Dr Jerip Susil and participated by doctors and staff of Kuching Specialist Hospital, dentists from government hospitals and officers from the National Registration Department.

The main activities held were health screening and assisting the villagers with their national registration and documentation needs.

Telok Melano, a quiet and tranquil village with sandy beaches and clear blue seawater, is about two-hour’s boat ride from the coastal town of Sematan.

It is home to around 200 people from about 50 families and has a primary school and a police station. 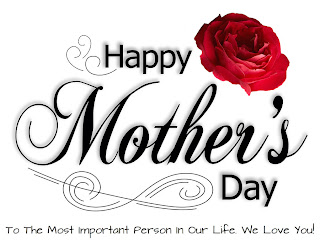 There is a ‘Mother Teresa’ in every mother whose immense sacrifice from the unimaginable labour pain to struggling to ensure the wellbeing of their children and family is beyond fathom.


And what better way than to thank and honour them in a ‘big’ way as what SUPP Sibu branch did yesterday, showering them with carnation, appreciation cards and food vouchers.

For it was the day when some 15,000 mothers from all nooks and corners of Sibu town were given a real treat at Sibu Town Square Phase One for their contribution to their families and society at large.

The smell of carnation filled the air and the celebration mood engulfed the riverine town.

Mothers formed a long queue stretching from the centre of the main stage right to the tower facing a bank for the three-hour event, organised by SUPP Sibu branch.

By 11am, the crowd swelled to a mammoth size and vehicles moved bumper-to-bumper near Sanyan Road.

“The event is very meaningful as it is our way of telling mothers that their immense sacrifice is appreciated. Being a mother is no walk in the park as it is more hectic than a full time job.

“Being also a homemaker in ensuring that the family institution is in order is indeed a huge sacrifice that mothers make,” Lau told reporters.

“We need to show our love and respect for our parents not just in words but also in action,” a vice chairman of the party Daniel Ngieng added.

Kapitan Datuk Janet Lau described women as great as they could accept praise or the lack of it.

“Women can accept it whether they are being praised or not. If we are praised for being great, we will not let it get into our heads. But, if we are not praised, we still go on. That’s the beauty of being women,” she noted.

Tiong hoped that the occasion would bring happiness to all mothers despite it being a short celebration.

“We just want mothers to have a great time and that their sacrifice and contribution to the society are highly appreciated,” he said.

Meanwhile, a mother of a seven-month-old toddler, Intan Nalen, was lost for words when interviewed yesterday.

“I really must thank the organiser for remembering the contribution and sacrifice of all mothers. We are so touched by their sincere gesture of expressing their gratitude publicly,” she giggled.

She added: “I have never seen so many people or mothers converging at one place to celebrate Mother’s Day. I hope this can become a yearly affair.”

For those present, they made use of the opportunity to foster closer bond and solidarity.

An employee of a private company Maureen Gamang said the occasion was an excellent platform for people to gather together and strengthen the spirit of goodwill.

Chieng Yew Ai, hugging her granddaughter Joline Lau when collecting her voucher, admitted she had never experienced anything like this before.

“In all honesty, I am truly thrilled and this is one Mother’s Day I will long remember,” she said.

Comnent :  Why not next year 'Mother's day',  we have a picnic/family gathering at Sibu Town Square ground, putting aside our difference of color, religious belief, races and political belief / One in 1Malaysia way.
Posted by 4th Man at 08:38 No comments:

The unemployment problem among graduates would be critical if job opportunities are limited and their degree mismatches the demands of job market.

“The latest statistic showed that about 76,200 graduates are still unemployed and the numbers will continue to rise with new graduates passing out each year, all competing for employment,” he said, yesterday.

According to him, the government need to take the initiative to reduce unemployment rate by creating new job opportunities in various sectors to cater for new graduates.

“If the job opportunities are limited, new graduates could also experience difficulty in getting a job as for every vacancy available, there are 50 graduates applying for it,” he stressed.

At the same time, graduates should not find it difficult to obtain jobs if their degrees match the job market demand, he said.

Wan added that employers play important role in selection process of applicants that matched the requirement of the job.

“However, graduates should also not be too choosy when job-hunting as they need to pay back their education loan once they complete their studies,” he said.

He had also foreseen the use of ‘insiders’ in securing jobs for extended family members as well as friends.

“This trend has been in practise for a long time. However, it is rarely exposed due to interest of important person in the company who probably has use his influence to hire family members as employees,” he said.

Therefore, he suggested that government and private agencies advertise their job vacancies available, to prevent favouritism.

Thank You For Visiting

I AM A MALAYSIAN BLOG 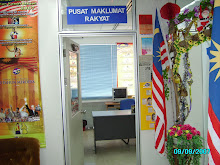 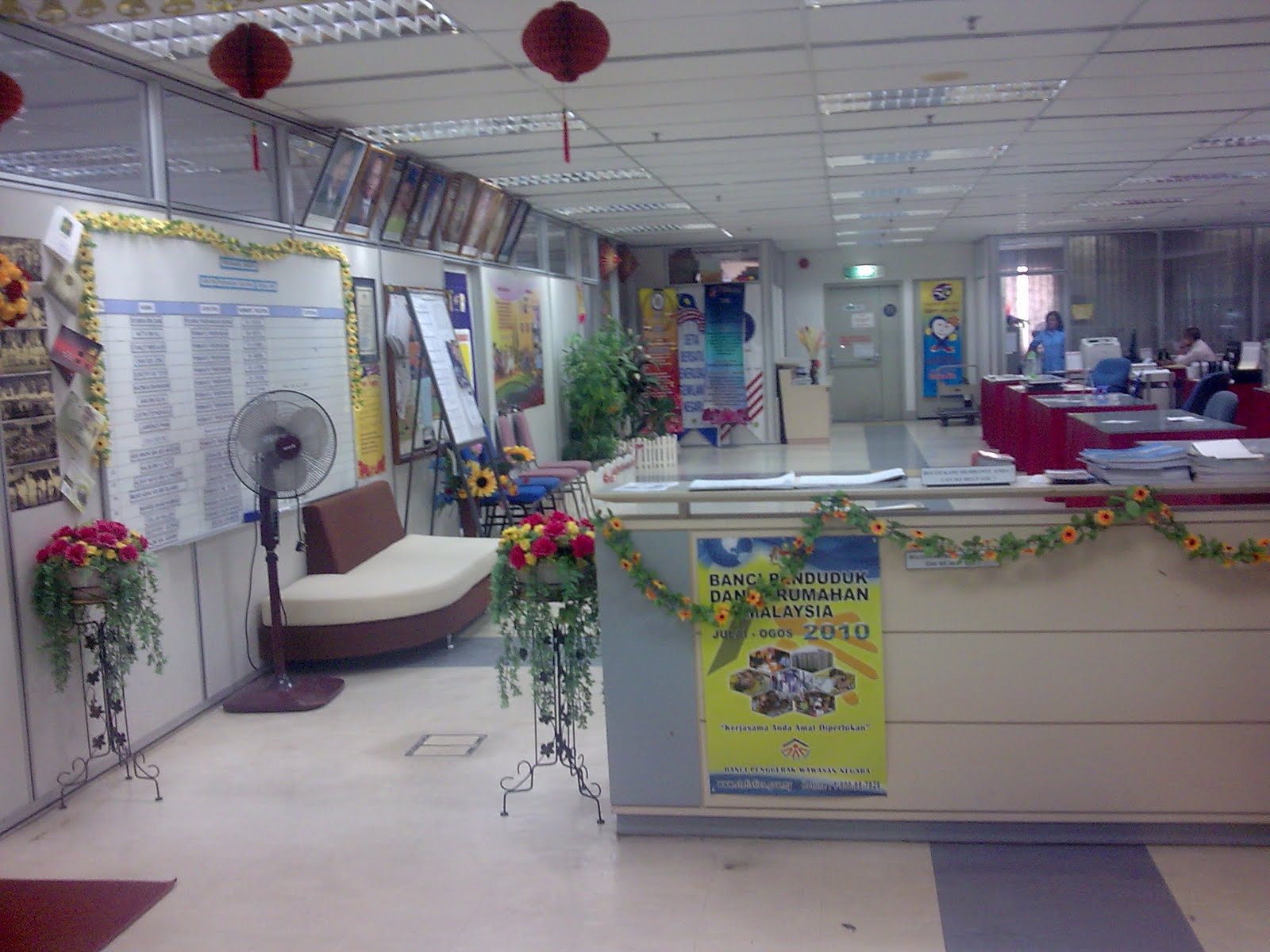 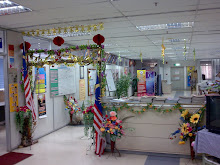 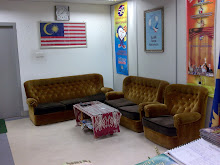 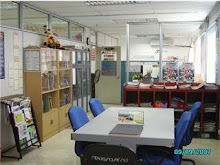 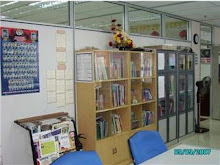 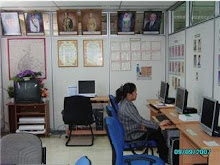 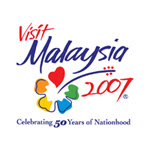